Don't overload your brain when you want to learn.

Have you ever been on a course where the trainer went through their material so fast that you barely learned a thing? Or the content was so complex that it went completely over your head?

In this article, we'll look at Cognitive Load Theory (CLT). This takes a scientific approach to the design of learning materials, so you can present information at a pace and level of complexity that people can easily understand.

How Do We Process Information?

Cognitive Load Theory builds upon the widely accepted model of human information processing shown in figure 1 (this was published by Richard Atkinson and Richard Shiffrin in 1968.)

It describes the process as having three main parts: sensory memory, working memory, and long-term memory. Since then, many researchers have added to our understanding of this concept, but the basic model remains the same.

Every day, you are bombarded with sensory information. Sensory memory filters out most of this information, but keeps an impression of the most important items long enough for them to pass into working memory.

For example, when you return a volley while playing tennis, your sensory memory discards information about players on adjacent courts, the sound of children playing nearby, the smell of coffee from the park's café, and so on, and focuses only on the approaching ball.

Information from your sensory memory passes into your working memory, where it is either processed or discarded. Working memory can generally hold between five and nine items (or chunks) of information at any one time. This is central to Cognitive Load Theory, as we will see.

When your brain processes information, it categorizes that information and moves it into long-term memory, where it is stored in knowledge structures called "schemas." These organize information according to how you use it. So, for example, you have schemas for different concepts such as dog, cat, mammal, and animal.

You also have behavioral schemas for actions like hitting a ball, riding a bicycle, ordering food at a restaurant, and so on. The more practiced you become at using these schemas, the more effortless these behaviors become. This is called "automation." Schemas are also significant to Cognitive Load Theory. Let's find out why.

What Is Cognitive Load Theory?

Cognitive Load Theory was developed by John Sweller. He published a paper on the subject in the journal Cognitive Science in 1988.

"Cognitive load" relates to the amount of information that working memory can hold at one time. Sweller said that, since working memory has a limited capacity, instructional methods should avoid overloading it with additional activities that don't directly contribute to learning.

For example, a labeled diagram places a lower demand on your working memory than one that has the labels listed at the side. Imagine, for example, how you would feel if we had presented the diagram in Figure 1 in this way: 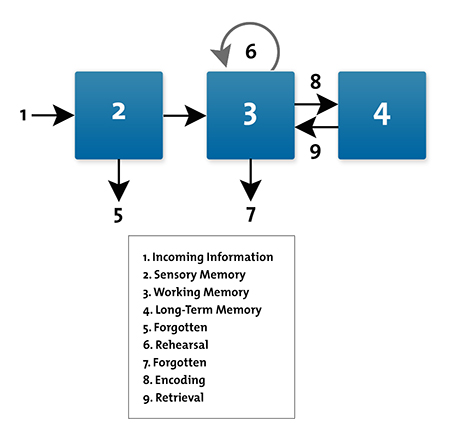 This is known as the "Modality Effect." So, for example, explanatory information has less impact on working memory if it is narrated, rather than added to an already complex diagram.

Second, working memory treats an established schema as a single item, and a highly practiced "automated" schema barely counts at all. So, learning activities that draw upon your existing knowledge expand the capacity of your working memory.

This means that pre-training, or teaching people prerequisite skills before introducing a more complex topic, will help them establish schemas that extend their working memory; and this then means that they can understand and learn more difficult information.

Cognitive Load Theory in the Classroom

Cognitive Load Theory helps you design training or learning materials that reduce the demands on learners' working memory, so that they learn more effectively. You can apply the concept of cognitive load to learning and training in several ways.

The more expertise you develop in a particular area, the more information you have available in your schemas. Remember, it doesn't matter how complex a schema is – it counts as a single item in your working memory.

This is why it is a good idea to adapt your instruction to reflect the level of expertise of the people you're teaching. Do this by administering a Training Needs Assessment, or ask learners to describe how familiar they are with the topic.

Next, use Bloom's Taxonomy of Educational Objectives to ensure that you present information at the right level for your learners – what seems obvious to you may not be at all obvious to them.

The "problem space" is the gap between the current situation and the desired goal. If this is too large, people's working memory becomes overloaded.

This often happens with complex problems, where the learner needs to work backwards from the goal to the present state. Doing this requires them to hold a lot of information in their working memory at once. Focusing on the goal also takes attention away from the information being learned, which makes learning less effective.

A better approach is to break the problem down into parts. This reduces the problem space and lightens the cognitive load, making learning more effective.

Other ways to reduce the problem space include providing worked examples and presenting problems with partial solutions for the learner to complete. These approaches are particularly useful, because they demonstrate strong problem-solving strategies in practice.

When you have multiple sources of visual information, such as diagrams, labels and explanatory text, your attention is divided between them. This adds to the cognitive load, making it more difficult to create new schemas.

This effect is reduced when you integrate visual information. Incorporate labels into diagrams (as in Figure 1), rather than placing them in a box to one side, or, if this isn't possible, focus in on one part first. If learners need to use a manual while working through a computer program, for example, allow them time to become familiar with the text first, before introducing the program.

You can learn another 60 learning skills, like this, by joining the Mind Tools Club. Split-attention effects also apply to multiple sources of auditory information. So, for example, if you are speaking to learners on a particular topic, try to remove any extraneous sources of noise, such as other people talking or music playing in the background.

4. Take Advantage of Auditory and Visual Channels in Working Memory

Another way to overcome the split-attention effect is to replace some of the visual information with auditory information. This reduces the cognitive load on people's visual working memory by also using the auditory channel, which has its own memory space.

In a 1998 study by Mayer and Moreno, for example, students were found to learn most effectively when they were shown an animation that was accompanied by narration, rather than the using same animation with added on-screen text.

You can replicate this by directing your learners' attention to parts of a diagram while talking about it.

Cognitive Load Theory (CLT) is an instructional design theory that reflects our "cognitive architecture," or the way that we process information.